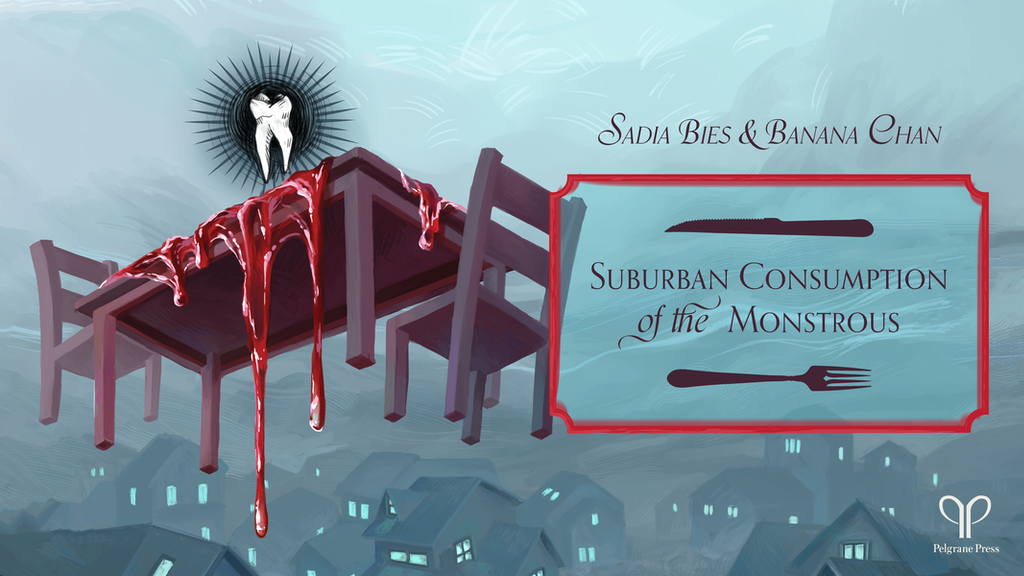 Suburban Consumption of the Monstrous

An anthology of horror live action RPGs set in suburbia with themes of food and consumption, written by Banana Chan and Sadia Bies.

Latest Updates from Our Project:

Thank you SO much! We've hit our first stretch goal, so that means everyone who has backed at the Mise en Place, the Foodie, the Gourmand, the Gastronome, the Epicure, the Connoisseur, or the Feast levels will now be upgraded to a hardcover book!


As a treat (Sadia and I have been making a lot of food puns these days), we have included one more level at £23k! Jonathan Sims is joining the team as a guest writer. Jonathan Sims is a writer, performer and games designer whose work primarily focuses on the macabre, the grotesque, and the gentle touch of creeping dread. His first book, Thirteen Storeys, a novel of social terror, is out now from Gollancz. He is also the mind and the voice behind acclaimed horror podcast The Magnus Archives, as well as story-game design duo MacGuffin & Co.


Our regularly scheduled stretch goal after that is at £25k, where we'll be printing the book in full color, meaning we'll be able to commission color pieces from all the artists we're working with!

Thank you so much again and we can't wait for all of you to feast your eyes (oh another pun, I'm so sorry) on what's to come.

Thank you so much for helping us get to £23K! We're now in our final 24 hours, but first, we're happy to announce that Jonathan Sims will be guest writing for Suburban Consumption of the Monstrous!

Jonathan Sims is a writer, performer and games designer whose work primarily focuses on the macabre, the grotesque, and the gentle touch of creeping dread. His first book, Thirteen Storeys, a novel of social terror, is out now from Gollancz. He is also the mind and the voice behind acclaimed horror podcast The Magnus Archives, as well as story-game design duo MacGuffin & Co.

Our next stretch goal is at £25K: A full color book!

Thanks again and we're looking forward to getting this book into your hands!

Thank you everyone for getting us to 100% with 3 days left! We really appreciate all your help in getting us to this point and now we can finally talk about the stretch goals!


Our first stretch goal we'd like to hit before the campaign ends is upgrading the books (where applicable - check the reward you've selected if it can be upgraded) to a hardcover with a vellum dust jacket. The dust jacket is also designed by the talented Sadia Bies and it's translucent so you can still see the cover behind it.

The second stretch goal is getting all the art done in color. Right now, we're asking the artists to do black and white art, but we'd love to pay all of our artists to do full color artwork, so the book really stands out.

Want to learn more about the artists we have onboard? Here they are!

Trevor Henderson is an illustrator and writer. His love of monsters, ghosts and other horrible entities is enduring and vast. When he is not drawing or writing scary things, he is thinking about the unknowable hostile forces working against all of humanity, and playing with his cat, who is named Boo. He lives in Toronto with his immensely talented partner, Jenn. You can find him on Twitter!

Jabari Weathers is an illustrator and writer for primarily tabletop RPGs. They are also suspected of being an exiled fey regent by suspicious parties, doing this work to keep up their glamour. You may recognize their writing in Van Richten's Guide to Ravenloft (Wizards of the Coast), Pathfinder 2nd Edition Lost Omens: The Mwangi Expanse (Paizo) and many other works, and their art for 7th Sea's Sortè Deck (Chaosium) Bluebeard's Bride's Tarot of Servants (Magpie Games) and a host of other indie works. You can follow them on Twitter!

Moro (Yas) is a self-taught artist from the UK who played too much Silent Hill 3 in their formative years. Committed to the monster horror genre, and loves creating and drawing a variety of horrible little guys. Previous projects include indie tabletop RPG works, and academic illustration in their field of study (palaeobiology). Here is their Twitter!

Tom Horstmann is a nonbinary illustrator based in the Toronto area. They draw sad queer horror using a whole mess of graphite. You can find them on Twitter!

Christian Degn is a visual artist and musician living and working in Provo, UT. He makes ink drawings which are informed by the landscapes and medieval stories from his childhood and makes music under the name Moray. Musical acts he has worked with include Black Wing, Inter Arma, and Pallbearer. Check him out on Twitter!

Coey Kuhn was once young and full of life, back in simpler times. Now living in Ohio surrounded by corn fields and ghosts they are a full time recluse, occultist & illustrator. Coey’s main passion is bringing what they want to see in the world to life, making the weird and unreal tangible. What’s more powerful than bringing what you want/love into existence- not only able to enjoy it yourself but share with others. Here they are on Twitter!

Thank you so much everyone for all of your support and for getting us to 93%. We really wouldn't be here without all of your help!

We wanted to share with you a list of some movies that we enjoyed while creating these games that could maybe inspire you when you're playing your characters!

Like with any piece of media, do a bit of research on these first before watching and if you find that a movie/show isn't really your thing in the middle of it, there's no shame in stopping and finding something else to do. Not all media is for everyone, so there's no pressure in continuing (your time is valuable!) But also, if you are a fan of some of these and you think there might be some films that we're missing, let us know in the comments!

Where to watch: Netflix

Our summary: A couple goes to a dinner party invited by one of the partner's exes (who went missing). They're having a great awkward time with old friends when suddenly they're made to watch a cult recruitment video. It's a slow burner, but gosh, it's so good.

Where to watch: YouTube/Amazon/any other streaming service for $3.99

Our summary: Okay, most folks have seen Get Out by now, but we'll still try to keep the spoilers out. A Black man meets his white relationship partner's family for the first time, only to discover their messed up side business. For fans of the genre, this is a must watch.

Where to watch: Tubi or Pluto TV (free)

Our summary: A comet flies over a dinner party and causes a blackout. Some weird stuff happens. This one is hard to explain without spoilers, but it's got some sci-fi stuff happening. The actors also didn't have a full script and just improv-ed a lot, so in a way it's like a LARP actual play!

Where to watch: Hulu (with ads)

Content warnings: Dysfunctional family (not the sitcom kind), death of an elder, death of a child, cults, violence

Our summary: Another popular film that a lot of folks have already seen, but to summarize (while avoiding spoilers), a family is going through the death of a grandmother. Unfortunately, soon after, the youngest child dies as well in an accident.

Where to watch: Netflix

Our summary: No spoilers, but it's about Munchausen by proxy (and dress making).

Where to watch: Tubi or Pluto TV (free)

Our summary: A family loses their mother and must try to move on without her. The family has very "traditional" roles and also partakes in cannibalism.

Our summary: A brother and sister grow up isolated from everyone by their parents—except for an anatomical medical doll. When the father dies, the doll comes to life. Though it's much creepier, it is strangely similar to how messed up the movie Mannequin (1987) is.


Looking for something longer to watch? Try these shows that we've enjoyed as well!

Where to watch: Shudder (or pay for via any other streaming site)

Summary: This is an anthology TV series so each season is a different story (based on creepypastas), but they are all set in the suburbs. S4 is my (Banana's) favorite (it's about imaginary friends).

Where to watch: Hulu (or pay for via any other streaming site)

Summary: Hannibal Lecter tricks his way into the lives of Will Graham and Jack Crawford by being sexy. He also happens to partake in cannibalism.